It's a mystery to me! This was the ultimate riding experience and we were only a group of five—a couple from France, an American woman and myself with my daughter. Why on earth are we the lucky ones, when there are so many skilled riders who could afford it as well??
It's so heavenly beautiful, as we sit on tall, slim, light-footed and easy to control Marwari horses. They carry us along narrow paths through dense tropical forest, along rows of small huts and cottages, mostly made from palm trunks and leaves, amid green fields and deep blue lakes. 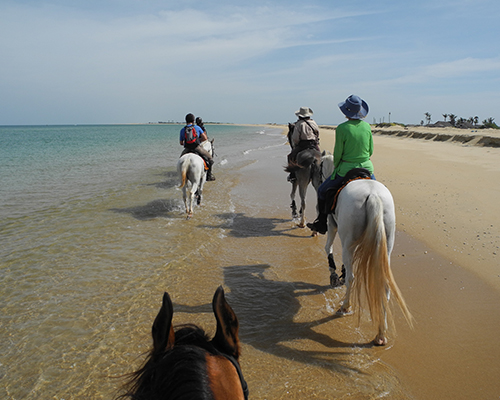 Kalpitiya: For our first two riding days, Ishan, our horse riding guide, lead us for hours on wide sandy beaches in walking pace and long gallop stages. Far and wide there was nothing else to see other than water, sand, wild donkeys, s ometimes some reed huts and fishermen casting their nets. In the end, the Boys took us deep into the lukewarm ocean.

We were far away from civilization, but not too far. Almost hourly each riding day, our Boys (one for each horse) came in a jeep to give us refreshments and water for the horses.

A unique feature of this tour is that the island’s attractions are also included— Buddhist and Hindu temples, ancient ruins and historical city centers.

Horses are rare in Sri Lanka. So when we rode on narrow paths, with airy houses left and right behind tall palms trees, adults and kids came running, waving, greeting, and taking pictures, because, yes, though often without electricity, everyone has a cell phone. Here poverty seems to have yielded away to moderate, satisfactory prosperity. 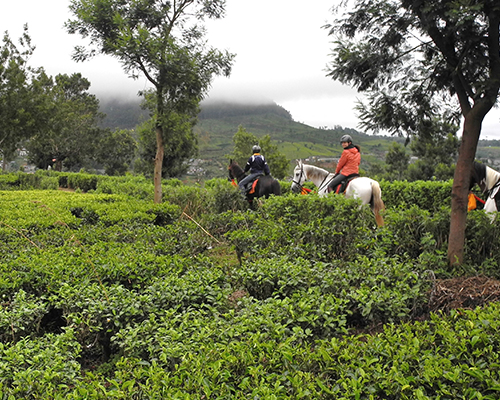 Already the next peak comes into view— the 200- meter high Sigiriya rock. When I last climbed Sigiriya about 40 years ago, you had to have mountaineering skills. Now, a convenient staircase leads up. So we experienced the rock now by climbing up, from horseback as well as elephant-back!!!!

It is cool and rainy in the highlands. Regardless, we enjoyed the 2 days ride here on winding paths through verdant tea plantations at an altitude of almost 2,000 meters.

During the last stage, tropical heat and humidity reached us again. We experienced things probably only the rich colonial officials of the British Empire once could—sundowners under palm trees by the lake, a romantic bungalow hotel in the colonial style and, as always, friendly, helpful staff and good food.

On a long jeep safari, we saw wild elephants close enough to almost touch them. 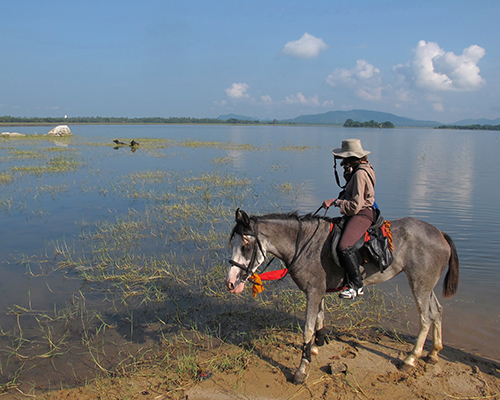 The last two rides led us again through a heavenly landscape, trotting and galloping along a creek and through vast paddy fields. We visited an abandoned dagobas, saw a monk with his disciples and men taking shelter in the middle of a papaya field.

The goodbyes were difficult. The horses, the Boys, our riding guide Ishan, and later at the airport, Ruki, the driver who took us safely from place to place every day.

Gone was the dream of paradise on earth. Paradise, which for the Buddhists of Sri Lanka is Nirvana, dissolving in thin air, for the Hindus, rebirth to live better lives, for Muslims, all eternity feasting and enjoying the pleasures of life under a shady tree and for Christians, the satisfaction of being close to God. But I’d love to ride all eternity through the paradisiacal Sri Lanka.

We listen to your vacation dreams.

We tailor-make your itinerary for you.

We book your hotels, activities, your chauffeur...

You enjoy an incredible vacation!